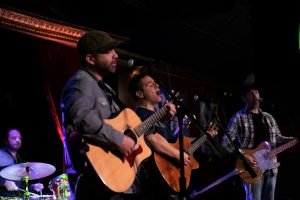 Cosmic American Derelicts have been performing throughout the northeast of the United States, and all over the UK, for over 24 years ( 2008 and 2014 with Terry Reid and then again in 2016),playing their own earthy mix of rock and roll, combining a bit of rhythm, a whole lotta blues, a few drams of honky-tonk/country western, mixed with a pinch of bluegrass and a dab of acid/psychedelia, these elements make up the key ingredients of the Cosmic American Derelict’s 100% proof sound.

Cosmic American Derelicts have recorded 4 albums and their fifth, ’The Twain Shall Meet’has just been wrapped and completed with a release date of May 2022. The recording is an all-acoustic roots/mountain music album which was produced by audio mastering legend Barry Diament ( Led Zeppelin, Bob Marley & The Wailers, Stevie Nicks, Bad Company, Robert Palmer, Pete Townsend and countless others) for SoundKeeper Recordings. It features 10 original songs which touch upon country, bluegrass, swampy blues, and folk music. The sound is pure like a mountain stream and full of vibe and soul. The band are in a very happy place, right now.

Over to founder member, George Kapitanelis:
“ It took me 25 years but I finally got us signed, and to a label that is all about the music, nobullshxt, or high falutin’ nonsense. I think the album is top notch and we are all very proud of it!.