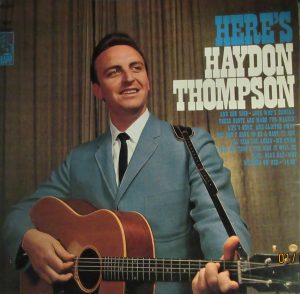 Hayden Thompson hails from Boonesville, Mississippi not far from Tupelo where Elvis Presley was born.

Hayden recalls singing the country music that was popular at the time Hank Snow, Louvin Brothers, EddyArnold etc. Some of them would play in the area and he would go and see them if he could.

He started singing in the Southern Melody Boys band which was basically a bunch of musicians much older than he was and solid fiddle/steel music. In October 1954 they cut two sides “I Feel The Blues Coming On” and “Act Like You Love Me” at a radio station in Alabama and they were released on the Von label.

By this time Elvis was starting to get played on radio. and the younger guys like Hayden wanted to do this rockabilly too. Hayden saw Elvis when he came to a local radio station to plug a show that night and on his second trip to the area where Hayden who was 3 years younger than Elvis got to chat to him and admire his car and the girls hanging around.

2022-01-25
Previous Post: Gary Vaughan – Burnin’ You Bad
Next Post: On The Cover – Tribute to the Legendary Stonewall Jackson