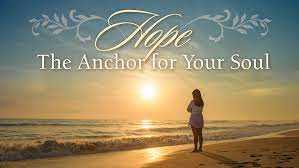 Where would we be if we didn’t have hope in our lives? Imagine soldiers going into a warzone without the hope of a peaceful outcome.

Recent thoughts brought me to the anniversary of the Somme a few years ago. I thought about what was going through the minds of the Tommies in the trenches. Hoping that the war would end before the big push, then hoping and praying that it would be cancelled at the last minute, and then as the whistles blew, hoping and praying they would survive. I thought about what was going through their mind as they crossed no-man’s land, facing their own mortality surrendering themselves to the hope of being with God should they fall, hoping that their sacrifice would bring peace and wouldn’t be in vain.

It’s a very powerful and very sobering thought that even in the darkest of places and times, hope still exists. I could go on for hours of the instances in the Bible where hope and faith have brought people through their troubles but I’ll just give you a little advice on that one. Do what I did, open up the new testament and look for yourself. You’ll be amazed at what you find.

I now sit here reflecting on my recent journey where I thought there was no hope, in my mind everything was lost. I had hit just about as low as anyone could go. For me at the time there was only one way out. I didn’t want to take that route but I felt I had no option. Despite being on my own and feeling totally isolated, I wasn’t. One remained. I have to admit I have never been the most Christian or religious of people. But I did realise that when I had got to that point and had no one left to turn to, God was there. Of course not in the physical sense but I knew he was there. Sounds a bit weird and far-fetched, I know but it’s true. What’s more, because of this, because of everything I have been through I know there was a reason for it. I can now see what so many other veterans are going through, I may not have the answers (Yet) but I can be there for them without being condescending or without judging them.

This to me is a gift that God has given me and I thank him every day for it. It is the easiest thing in the world for me to sit back and say don’t give up, there is always hope but please, I beg you, don’t take my word for it. Don’t make my mistake and wait until everything has gone pear-shaped and you are left on your own before you ask God for help. Do it first, you may be surprised what happens next.

Here’s a helpful passage from the Bible: Romans 5: 1-5