Interview with James White & The Wildfire 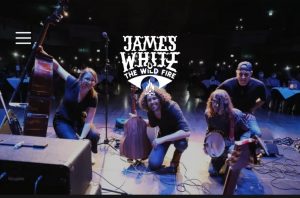 Where are you from/located now:

We are all over the place at the moment but our HQ is in Saffron Walden, Essex. I am from Ipswich originally whereas Ed is now in Liverpool for the time being, Brooke is originally from Iowa in the United States and Lee is just a wanderer! But right now, we practice and three quarters of the band are based here in Saffron Walden.

Can you tell me what first influenced you towards Country Music?

I previously was an acoustic-indie rock artist when I was a solo act. But I fell in love with artists such as Tyler Childers, Ian Noe, Sturgill Simpson, Kacey Musgraves and Billy Strings and dived head first into Country music. It just resonates so much with what I love about music in terms of content and style – so I feel I am still playing catch up with the genre!

Who were your idols, who did you listen to when you were younger?

The reason I first started playing guitar was because of Angus Young of Ac/Dc. I then became enamoured with artists like Guns N’ Roses, Nirvana, Oasis, Metallica, van Halen, so my roots are really built in classic rock! I then did comedy acoustic for 9 years playing under the alias Rage Against Genital Herpes so I leaned heavily on acts like Stephen Lynch. Now the dream is to tour with Tyler or Billy!