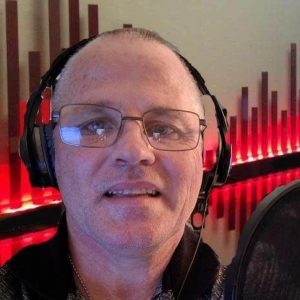 Hello my name is Tim Kelly. My interest in radio started at a very young age. I was aboyt 12 when I really got interested in it. I had some friends growing up, whose Dad was a radio DJ in our town. He was on the air for years, and I always loved his voice.

Back then it was the deep radio announcer voice that was very popular. Then in 1986, I moved to San Diego California. I looked into a broadcasting school called Columbia School Of Broadcasting. Their motto was “ You’ll never know what you can do until you try.” A gentleman by the name of Burton Richardson was on their board of directors. He was the announcer for the Arsenio Hall show. He graded some of my work. I grew up listening to 80’s music.

On air personalities like Rick Dees on KIIS Los Angeles, Jay Thomas from KPWR Power 106. He also played Carla’s husband in Cheers. And of course Kasey Kassem from American Top 40. Those guys were stars in the business to me. I wanted to have a show, and maybe be famous like them one day. Well, life happened, and it wasn’t until 1999, while living in Oklahoma that I walked into a country radio station that I listened to in McAlester Oklahoma, that I got my first on air radio job. I asked them if they needed a radio DJ. The lady said, as a matter of fact we do. They hired me part time on the weekends at $5.25 an hour.