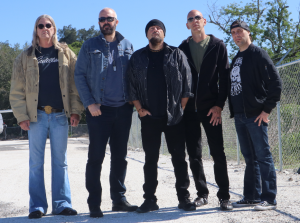 While it would be fair to describe 308 Ghost Train as a reincarnation of the best-loved classic rock bands from the late 60s, 70s, and 80s, based on their sound and musical vibe, Anthony Caruso- the singer, frontrunner and head of the band – is an original and refreshing new force on the rock scene, yet still manages to bring the old-school rock voice back to life, and back into fashion.

Whilst the name ‘308 Ghost Train’ is a pretty unconventional name for a band, it’s certainly fitting – they’re no ordinary band. While the classic rock sound tolls from each and every song the band produces, the songs’ messages are far from that of their rock-era counterparts, which glorified ‘Sex, Drugs & Rock ‘n’ Roll’.

Anthony Caruso, and the sound of 308 Ghost Train, are like whisky and wine; they have improved with age. The wisdom and experience which accompanies the process of getting older, of losing your naïve young feathers, and gaining a strong, mature plumage, is intertwined into all of Caruso’s songs

in their catalogue, From their first EP ‘Born in the Wild’. Then rolling into “Somethin’s Goin On” which had released singles starting with “Bleed Over Me” on June 3rd, 2020. It was full steam ahead from there with Next Stop No Brakes was released Jan 14, 2022, with the highly popular Little Miss Misunderstood and CHAOS.