On The Cover – Dan Ferrell: My Life, My Music 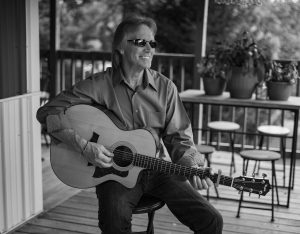 Dan was born December 18 on a cold, Denver day. He is the second of six children born to Bill and Dorothy Herrell. All of his family are musically inclined, and all are successful in following their dreams. Although Dan lost his father in 1997, his mother is still his biggest supporter and fan.

Dan’s dream however was to sing country music. He started playing a banjo at the age of 7. His uncle, Bill McClarren, taught him a song on his banjo at his grandparents one day. The next day, his dad bought him his own banjo. By teen years, he excelled in school and started his very first band. It consisted of 2 bass players, 2 rhythm players, 2 lead guitar players and a drummer. The name of the band? You guessed it, the Lucky Seven Band.

The group practiced and played at his Dad’s service station and played at local gigs. Many people and events shaped Dan’s style in singing, but he gives most of the credit to his mom and dad. He and his family listened to all the great country artists from the 50’s through the 90’s, and he honed the art of pleasing a crowd with his voice and stage presence. A bit of a jokester at heart, entertaining people came as second nature for this handsome and talented country
music man.

After graduating high school, Dan joined the United States Air Force. While stationed stateside at Tinker Air Force Base in Oklahoma City, Oklahoma, he was deployed several times to the Middle East. When he was still in the military, he played music with a group he helped form called Night Shade, and they performed in the Oklahoma City area for the next 4 years. On his first trip to Nashville, he participated in a show called You Can Be A Star, with hosts Jim Ed Brown and Dan Miller. He won the daily, and then the weekly competitions, but lost in the semifinal.