On The Cover… Will Wesley 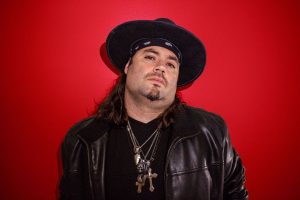 Will Wesley is a musical force to be reckoned with. As a multifaceted singer, songwriter, and guitarist, Wesley has performed around the world playing his music. He is the very embodiment of the troubadours of old; traveling from town to town playing songs he has pulled straight from his life experiences. No stranger to adversity, Wesley has overcome many obstacles through pure determination and grit. From growing up on the streets of a small town to the bright lights of the stage, Wesley perseveres and prospers.

Wesley’s road to recording studios and video shoots began in a music-loving household in Baker, Louisiana, a small city 90 miles northwest of New Orleans.His father was a guitarist and taught Wesley about all kinds of music—from jazz artists Dave Brubeck and Miles Davis to flat-picking guitar great Doc Watson, the Eagles and bluesmen B.B. King, Albert King and Albert Collins. He was seven years old when his father took him toa bluegrass concert at the Old South Jamboree in nearby Walker, LA. “I’ll never forget it,” Wesley said. “Watching them play so skillfully, that’s where I got my love for bluegrass and live performances. It blew me away.” Wesley’s fatherbegan teaching him chords and scales at a young age. When Wesley’s father had taught him everything he could, Wesley was passed on to local guitar teacher Jody Mayeaux to expound on the intricacies of musical theory. Will learned to play the blues, jazz, country, and many other styles backing different local artists as a young man. When Wesley had developed an identity as an artist himself, he stepped into the spotlight from the wings and never looked back.

When floods, pandemics and other disasters threatened to stall Will Wesley’s progress, he finds away to carry on. Wesley has had to endure many challenges in his career. When the historic Louisiana flood of 2016 destroyed most of his possessions Wesley was unable to perform. The small town of Natchez, MS was so distraught that Wesley couldn’t come perform for them, the town banded together to purchase Wesley enough equipment to continue to come play! Even when the COVID-19 pandemic slammed the doors on performers, Wesley couldn’t allow himself to quit. He still created a trilogy of music videos, held one of the first socially distanced concerts in the state of Louisiana, and finished his new double-disc album, Both Sides of the Tracks.