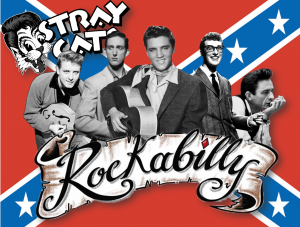 Rockabilly is one of the earliest styles of rock and roll music. It dates back to the early 1950s in the United States, especially the South. As a genre it blends the sound of Western musical styles such as country with that of rhythm and blues, leading to what is considered “classic” rock and roll. Some have also described it as a blend of bluegrass with rock and roll. The term “rockabilly” itself is a portmanteau of “rock” (from “rock ‘n’ roll”) and “hillbilly”, the latter a reference to the country music (often called “hillbilly music” in the 1940s and 1950s) that contributed strongly to the style. Other important influences on rockabilly include western swing, boogie-woogie, jump blues, and electric blues.

Defining features of the rockabilly sound included strong rhythms, vocal twangs, and common use of the tape echo; but progressive addition of different instruments and vocal harmonies led to its “dilution”. Initially popularized by artists such as Carl Perkins, Elvis Presley, Johnny Burnette, Jerry Lee Lewis and others, the rockabilly style waned in the late 1950s; nonetheless, during the late 1970s and early 1980s, rockabilly enjoyed a revival. An interest in the genre endures even in the 21st century, often within musical subcultures. Rockabilly has spawned a variety of sub-styles and has influenced the development of other genres such as punk rock.

There was a close relationship between blues and country music from the very earliest country recordings in the 1920s. The first nationwide country hit was “Wreck of the Old 97”, backed with “The Prisoner’s Song”, which also became quite popular. Jimmie Rodgers, the “first true country star”, was known as the “Blue Yodeler”, and most of his songs used blues-based chord progressions, although with very different instrumentation and sound from the recordings of his black contemporaries like Blind Lemon Jefferson and Bessie Smith.