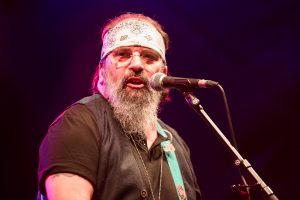 Stephen Fain Earle (born January 17, 1955) is an American rock, country and folk singer-songwriter, record producer, author, and actor. Earle began his career as a songwriter in Nashville and released his first EP in 1982.

His breakthrough album was the 1986 debut album ‘Guitar Town’; the eponymous lead single peaked at number 7 on the Billboard Hot Country chart. Since then Earle has released 20 more studio albums and received three Grammy awards each for Best Contemporary Folk Album; he has four additional nominations in the same category. “Copperhead Road” was released in 1988 and is his best selling single; it peaked on its initial release at number 10 on the Mainstream Rock chart, and had a 21st century resurgence reaching number 15 on the Hot Rock & Alternative Songs chart, buoyed by vigorous online sales. His songs have been recorded by Johnny Cash, Waylon Jennings, Willie Nelson, Levon Helm, The Highwaymen, Travis Tritt, Vince Gill, Patty Loveless, Shawn Colvin, Bob Seger, Percy Sledge, and Emmylou Harris. He has appeared in film and television, and has written a novel, a play, and a book of short stories.

Earle is the father of the late singer-songwriter and Justin Townes Earle who often collaborated with Steve Earle.

Earle was born in Fort Monroe, Virginia, where his father was stationed as an air traffic controller. The family moved to Texas before Earle’s second birthday and he grew up primarily in the San Antonio area.