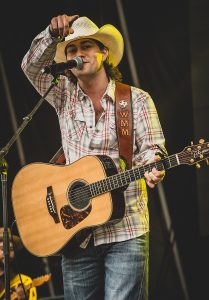 William Michael Morgan (born May 13, 1993) is an American country music singer from Vicksburg, Mississippi. He was signed to Warner Bros. Nashville.

His debut single “I Met a Girl”, reached number two on the Country Airplay chart and number eight on the Hot Country Songs chart in October 2016; the song was co-written with Sam Hunt. The album’s second single “Missing”, was released to country radio on November 7, 2016. His debut studio album Vinyl, was released on September 30, 2016. Morgan parted ways with Warner Bros. Nashville in January 2019.

William Michael Morgan released 4 Singles in 2018, as the 5 instalments in Morgan’s From the Neon Lounge video series.

William Michael Morgan has only just arrived in his mid twenties, but with a love of country music deeper than The Big River itself, the Mississippi native is the very definition of an old soul. His pristine Southern vocal, timeless sound and honest lyric represents a new generation of hit makers in Music City; a modern-day descendant of artists like Randy Travis, Alan Jackson and George Strait.

After signing his major label deal at the tender age of 19, Morgan began by hitting the top of the radio charts, landing at No. 1 on Mediabase with the Gold certified “I Met a Girl…” He then released an acclaimed EP and earned a Billboard Top 5 with his 2016 album debut, “Vinyl”. He has performed more than 50 times on the Grand Ole Opry and was featured by the Country Music Hall of Fame and Museum as a highlighted artist in the 2017 American Currents exhibit.