Stars and their Guitars – Trigger 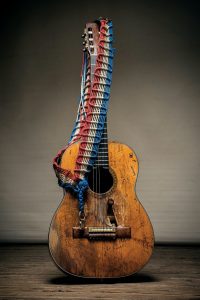 To look at Trigger, you would think that somebody had taken a shot at Willie Nelson with a Colt .45 or had swung a hammer at it for some cruel reason. The cold truth about the battered and bruised Martin N-20 is that it has gone through over 10,000 gigs and had picked up a myriad of battle scars along the way. Despite it’s road-worn look, Trigger is probably the most loved guitar around. Adoring fans will queue for hours to take a photo of Willie’s pride and joy prior to any concert. So let’s take a closer look at the first of our ‘Stars & Their Guitars’.

The legend of Willie Nelson’s guitar began in 1969 after his Nylon string Baldwin got busted up by a drunken patron’s misstep while Nelson was gigging on the outskirts of San Antonio, Texas. When Nelson sent the Baldwin guitar back home to Nashville to be revived, the repairman told him it was beyond hope, and mentioned that he had a new Martin for sale. Since Nelson had liked the Baldwin’s amplified tone, he asked the repairman to pull the pickup from his totalled guitar and install it in the Martin, and Trigger was born.

In late 1970, Willie’s house outside Nashville burned to the ground, cause unknown. He and his family lost just about everything: clothes, furniture, master tapes. The tragedy had a purifying effect, though, wiping out Willie’s unhappy past in Music City and opening up the future. And it gave him a good excuse to get out of Nashville for a while. He jumped at the chance, decamping for Texas. When he left, he took one of the few valuables that had been spared by the flames: his new Martin guitar.

For the next few months, Willie settled into a house near Bandera while his Nashville home was rebuilt. He sat around contemplating his future and playing his guitar. He hadn’t named the instrument yet—that came much later—but for the first time, Willie had fallen in love with the sound of one of his instruments. “When I found that guitar and amp, I knew that was the sound I was trying to get, that Django sound,” he says. Django had actually played a steel-stringed Selmer guitar, but to Willie, its mellow, plucky tone (a product of the tortoiseshell button Django used as a pick) sounded like a gut-string. Like his Martin.

Continue reading the full article in the magazine…