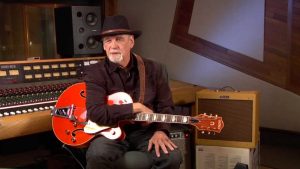 The superlatives run thin when talking about Duanne Eddy. His deep twangy sound has been a legendary part of the world of contemporary music for seven decades and has one of the most unique guitar styles ever. As I write this, it is the eve of Duanne’s 84th Birthday (Many happy returns from all of us at CME, Duanne. May there be many more). So to celebrate a true guitar icon, we present Duanne Eddy in the ‘Stars and their Guitars’ Hall of Fame.

*Born April 26, 1938 in Corning, New York, Eddy was playing guitar by the age of 5. In 1951, his family moved to Coolidge, Arizona, where, at 16, he formed the duo Jimmy and Duane with school friend Jimmy Delbridge. During a performance at a local radio station, they met disc jockey Lee Hazlewood, who produced a single for them in 1955.

After the duo split, Eddy and Hazlewood had a string of 1950s instrumental hits including “Rebel Rouser,” “Cannonball,” Ramrod,” “Peter Gunn,” and “Because They’re Young,” and by 1963, the 25-year-old guitarist had sold 12 million records. The majority featured his trademark technique of picking out melodies on the low strings of a reverb-drenched Gretsch (reverb courtesy of a buried water tank at Phoenix’s Audio Recorders studio). Added to this formula were background vocals (wordless or otherwise), a sax solo, and occasionally some shouting for added excitement, before restating the melody. Though known primarily for his bottom-heavy twang, delving deeper into his output reveals Eddy is an adept picker in the Chet Atkins style and a soulful blues player as well.*